Thank you, you were right!
The problem is always between the keyboard and the chair. The true question is which keyboard and which chair

(There are mines on these places)
Thank you for your help !

Please always add a replay link for that kind of bug report.
I’m not sure if that message is supposed to make you lose instantly, but it’s incorrect for sure.
“But you can use each type of action only once per turn”
“You can’t trigger multiple mines in the same turn.”

Ok, didn’t read all the green lines, sorry !!
I trigged only one mine and I win the game !
“The problem is always between the keyboard and the chair” is true !

Hello! A minor inconsistency in the rules (at least for Wood league).

“If you fail to output a valid action, you will SURFACE in that turn”

“Intersect your own path, move into an island or out of the map”

It’s a minor point because it’s bad coding to output illegal actions, anyway, but if I move to an invalid location (this would fall under “failing to output a valid action”) will I surface or will I lose immediately? A quick test reveals it’s of course the later, but this should be clear in the rules.

I’m getting a timeout issue using Swift. I put a timer around the first readLine() and it is taking 40+ ms (with a 50ms game timeout). It jumps around, and I get through 6-8 turns before getting timed out.

Hello! A minor incontinence in the rules (at least for Wood league).

Incontinence is a term that describes any accidental or involuntary loss of urine from the bladder (urinary incontinence) or bowel motion, faeces or wind from the bowel (faecal or bowel incontinence).

Maybe you meant inconsistence… Please, do not piss in the Ocean (of Code) 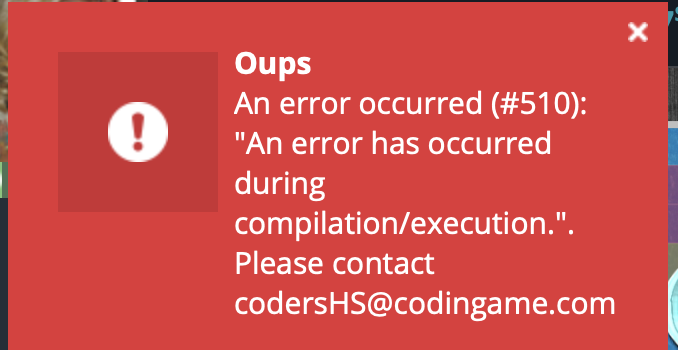 We did an update of the game. The input scheme for MSG got a little stricter.
Double MSG and an empty MSG is no longer allowed. Sorry for the inconvenience

Maybe you meant inconsistence… Please, do not piss in the Ocean (of Code)

. I really don’t see how I could’ve missed that! I don’t even have the excuse of auto-correct. While we are at it, it’s actually inconsistency. (fixed my previous post to reflect that). My initial point stands, though.

This post got longer than I anticipated, so it now needs a big huge

“this is a great idea and implementation! Thanks to the creators!”

Now, who am I to miss an opportunity to mess with native English readers’ minds?

Now that I’ve got the full statement, here’s a list of incontinencies (or ambiguousnesses that would need statement clarifying because they can result in at least a local incontinency):

And a few non-fatal infelicities:

I’m normally not that strict about statement details; but this contest happens to be all about interpretation of the opponents’ decisions, and an incorrect interpretation has very drastic yet hard-to-pinpoint consequences. It’s poor form to have to peek at the referee that much.

(I’ve got a few other totally trivial spelling/grammar/style corrections as well, if there’s any interest for that. Are PRs still in order?)

Getting timeout on first readLine >2500 ms

To be applied using standard git tooling: download the patchset as something descriptive such as JBM-patchset.mbox and then:

If I am not mistaken there is an issue in the input format in C, in the map, to check this I did reset my code to the basic one, then used fprintf stderr the lines of the map, and it only read every other line. I put two screenshots there : https://imgur.com/a/D2xNTWr https://imgur.com/a/m1Nyity

@AlWerewolf
You have to start your timer after reading your first line of input and stop it before printing your action. Otherwise you stop all kind of other things (referee, opponent bot).

@JBM
Thank you very much for your efforts.
It would be much easier if you do a real pull request on github or at least share your final statement instead of the diffs. There’s a probably a tool or a feature of a tool that I don’t know but to me it looks like a lot copy-pasting of single lines.
I can’t promise how fast we will update the statement, as only CodinGame can update the contest.

@MiniWolskys
You are right, the lines aren’t fully parsed in the first run, so the second run gets the linebreak. Try to read one more character with char line[width + 2] and fgets(line, width + 2, stdin).
I’m not sure if I should see this as a bug in the game or the code generator.

There’s a probably a tool or a feature of a tool that I don’t know but to me it looks like a lot copy-pasting of single lines.

They’re git format-patch diffs. You just git am them.

Sharing the final state is easy enough, but it wastes the rest of the commit history information

Out of the git world, the standard tools for this kind of work are simply diff and patch.

(and you’re making me notice I deleted the first character in the first one. sigh updating patches now.)

Hello.
There is one performance issue. It may be connected to the framework/site itself, not this particular contest.
Here is a replay (open with caution): https://www.codingame.com/replay/443561978
It puts heavy load on a cpu. It plays at 6 fps on x10. But even on x1 it lags significantly every turn, though it tells me about 40 fps. Other replays don’t behave like that, I have 60 fps on x10 in every other.

My guess is that it struggles to render the result of “MSG …” command of another player.

And here’s the second patchset and resulting template.

Sorry, what games are we saying?