Created by @Teiglin,validated by @jordan_codingame,@_CG_MathisHammel and @CodinBoss1234.
If you have any issues, feel free to ping them.

Hi, I share with you my first idea which is : RANDOM CHOICE

I’m a little bit confused about the constraints:

Indeed, thank you for this report. I don’t even know why I wrote this constraint, it should not impact players. I will remove it after the event (I prefer to edit the game as little as possible while it is “featured”).

Well, surely there must be some constraint. Like, is it constrained to be representable by a 32-bit integer at least?

I can write at least that the value is positive, and since I wrote that the sum of the values is below 12000, it should be enough. By the way, if there were cells with negative value, it would be funny since it would mean that we might want to “guide” the fire towards these cells

But it would be another game.

guys i just entered and all test cases went good is it normal ???

Note: Tests cannot fail. If a test is ended because of a timeout or a bad output, the game will compute the spreading of the remaining fire (if any) for the final score.

Awesome puzzle!
I initially thought it would be too challenging so I didn’t attempt it. I Decided to try it since it was the featured puzzle, and I really enjoyed it.
The puzzle is unique, easy to understand, and has a good variety of test cases.

If the best solutions are revealed at the end of the event, doesn’t that kind of defeat the purpose of a competitive puzzle?

No worries, that will not happen. Thibaud has replied on Discord, and I quote him as follows:

I’ve set the review start date as the end date so this phase shouldn’t happen and no solutions could be shared.
Not ideal and quite misleading for all users, but the only other solution I see is to cancel the event, which would be a shame

Thanks for the quote!

We(mostly I) could learn a LOT if the best solution is revealed. But then, it may not be fair to the winners.
I’m looking forward to the post-analysis if there’s going to be one either way.

Is there no post contest analysis? I would really like to learn how to solve this optimally (or be as close as possible). I suspect this problem might be NP hard.

I’d be happy to explain the general algorithm behind my solution (currently ranked 4th). I’m still somewhat new to this site so I don’t know if this is allowed or if there are any rules/guidelines I must follow. Perhaps someone can let me know. Cheers

Explanation is allowed, as long as you don’t share any working code in full.

An explanation of my algorithm (currently #4):

The most significant part of my algorithm is how I represent a candidate solution. Representing candidate solutions as a sequence of random cuts is very unlikely to yield any points or at least have an effective use of cuts. All sequences of cuts that generate some points have something in common: they disconnect section/s of the map from the fire.

Therefore I represent my candidate solutions as a set of cells on the map that I want to save (be disconnected from where the fire is). From this I can determine a few things:

I initially used a simple hill climbing approach where I do as follows:

This approach was already quite effective. Regarding performance, I could get around 60-80k iterations (of the inner loop) for the 7th test case

The improvements that got my solution to #4:

Feedback and questions welcome! I’m also curious to know how other players attempted this challenge.

My solution (#6 at the end of the event)

I didn’t find a unique algorithm that works for all, so i used conditions to recognize the situation.
If tree_fire > 4*tree_cut => cut all around fire
if xMin==xMax || yMin==yMax => one dimension grid, cut next to the fire
if horizontal/vertical line with few cells to cut => cut it straight, trying diagonal when possible.
Etc…
The most difficult tests case were the two last : to find the good diagonal througth the village, and in the random grid, to find cells where cutting one tree can block the fire (because of existing cutted cells).

I admire those that found an algorithm working for all.

My algorithm is sitting at 53K only but I am proud of it anyway. 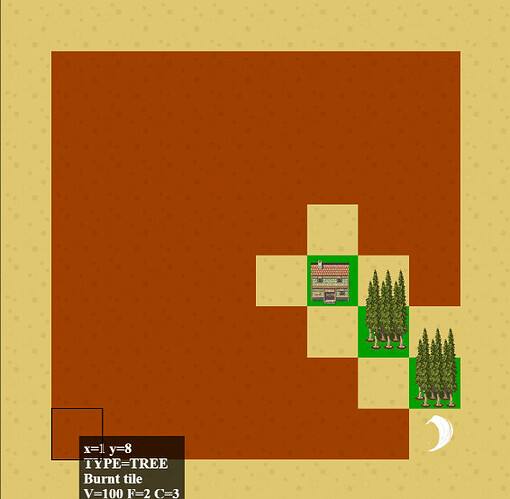