Created by @eulerscheZahl,validated by @dbdr,@kovi and @darkhorse64.
If you have any issues, feel free to ping them.

I really like the idea of this puzzle. I’ve always really liked tower defense games and this is no exception. While it’s probably a bit too easy for my liking I would like to share some feedback about it. Fire Tower is insanely powerful, if the layout of the map allows you to place it in a perfect spot all you really need is a single fire tower and perhaps 1-2 slow towers to clear all waves (or nearly all, I would have to verify it tbh). I’m still very happy that you’ve decided to make it, so others can enjoy it. Thank you very much for all of your hard work!

When it comes to tactics - usual rules of tower defense games apply, the more attacks you’re able to make with all of your towers, the better. Blocking very useful spots for enemy is also really handy thanks to healing towers. Healing towers are a nice touch and it feels like they could be quite devasting if used at the right moment. I think more advanced tower defense game would be even more enjoyable, but seeing how few people are interested in this one I’m a bit worried

@eulerscheZahl
If you would like I can help you out with writing some tests - I remember seeing that you would like to see if all waves can be beaten.

I agree that the fire tower is probably too powerful now. I made it stronger based on feedback while it was still word in progress.
Sadly it’s approved now and some players already wrote a bot for it. So I’m hesitating to change the balancing now.
And yes: I want beatable waves to encourage the use of heal towers.

I think this puzzle serves really well as a first step towards tower defense bot programming.

I’m not sure if more advanced version would actually help - there’s already quite a lot of contests. I just would like to say thank you for making this one

If you will be thinking of something similar in future please do notify me and I’ll try to help you out to the best of my abilities, it might not be much, but it’s always something.

I’m surprise to see that people with the most money wins (in case of nobody loss all its lives), even with less lives than their opponent. Wouldn’t it be better to have as winner the player with the bigger amount of lives, and use the money for breaking a tie?

This seems more in the spirit of a Tower defense and would force players to focus on finding and blocking the best locations rather than saving money.

Actually the score is 100*lives + gold. So lives also matter.

Thanks for the quick answer. Good to know, i did not found it in the main page description and observed that top people in the leaderboard were winning by money and not per live.

This is a great game, I have such of great time playing it. Tower defence genre is my favourite so I’m happy it has appeared on coding game. I have so feedback also.

Glue tower works here not like any other tower defence games. It slows attackers to 20% of their max speed no matter of tower upgrades. And the damage of glue tower indicates how many turns attacker will be slowed. It is not obvious and i would clarify it in statement. Also since it has area effect, the animation could be more like fire tower with blue color.

Heal tower - I have tried so many builds to make it work and barely found a few and only vs fire tower. Since gun towers with damage upgrades can eliminate attacker with one shot, heal tower can’t do anythings vs gun build. Would be more useful if attackers have no max health. Only starting health which can be increased by heal tower.

I discovered that overall attackers count through the game correlates with canyons count on board. More canyons, more attackers would enter board and more money they can bring. This is useful tip to plan your build and gather more money in last wave than opponent. Could be mentioned in statement.

Ones again marvelous, very addictive game which brings me many hours of fun. Thank you eulerscheZahl for efford to create it. Also thanks to all testers and contibutors. If you plan to make next version or simmilar game like tower wars I encourage you to do so

sry, the game stopped working and gave me this :

Thanks for reporting. It seems that you (or your opponent) tried to build outside of the map. I fixed it but can’t upload the new version (I tried 3 times, always the same result): 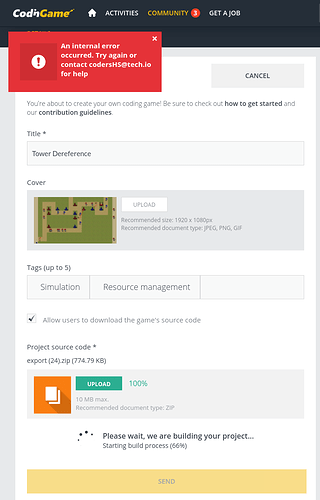