Created by @skotz,validated by @Trilusion,@FDA44 and @Dartisan.
If you have any issues, feel free to ping them.

I’ve been trying to figure out how a strictly random move bot can beat a directed bot so readily. And after reviewing the referee and board .java … I think it’s because java is ensuring an even distribution. Meaning that a cluster has a high probability of blocking the shorter paths. Where I’m enticed to ‘battle it out’, my bot fails, where the random bot naturally finds empty positions by the random number distribution. I’m not sure if line 332 of board.java if (growthMoves && expandMoves & captureMoves && maxGrowthValue >= Settings.MaxVolcanoLevel) { is even correct. It probably doesn’t even get called, but it looks suspect to me anyways. As for how to combat a random move bot…well that’s another matter entirely. Moving to either enhance path options or blocking in 2 or 3 steps from desired path or enemy path to create a cluster would seem the logical conclusion. But with so many options of algorithms, I’m kinda stumped - because if you block one the random bot will naturally find the other 2 for multiple junctions so a ‘best guess’ is so close to random imho I’m finding it hard to be worth the time. Although I appreciate the 100ms. tx.

It’s important to take eruptions into account as they will automatically expand your territory. That’s why it’s rarely a good idea to play on tiles directly adjacent to an already-owned tile.

Hi!
I encountered a weird behaviour, where level 4 volcano gets “deleveled” to level 3, but remains unplayable. 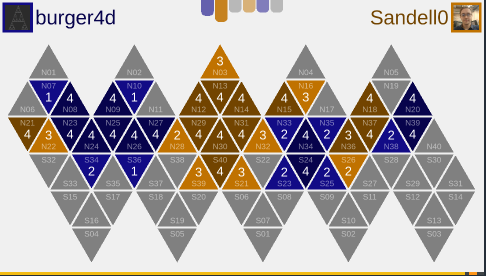 @Sandell0 Yeah, that looks unintentional. Do you have a link to the specific game?

Most of my games against burger4d are like this:

@Sandell0 I’ve applied a fix. Could you test and let me know if it happens again?

Seems fixed to me. At least I can’t reproduce it anymore.

Sorry if I duplicate but I don’t know the hell where my first post landed!

At frame 8 it is time for grow, and the result is strange to me. It is not symetric anymore and some tiles close to eruption have grown by 2 instead of one. Tell me what you think.

@EricSMSO Yeah that looks like a bug. I’ll take a look.

I believe I have a fix, but the contribution uploader has been down for at least several hours now. I’ll try again tomorrow.

I guess it is in processEruptions(). When you process deltas, you should work with a copy of Tiles instead of testing and modifying in place.
CU

@EricSMSO The change should be out there now. Let me know if you run into any more problems.

The issue was with how I was handing dormant volcanoes. It was possible under certain conditions for a volcano to double erupt before being marked dormant.

Thanks skotz,
Hope I’ll manage to develop a better bot…

Hi - nice puzzle. I was looking at your github entry. Is there a way to run the script to just produce outputs from inputs ? I know this is probably a dumb question (warning-i’m just a hobby coder), but I just want to execute the game locally by feeding it values and getting the resulting game states so I can play with an ML approach.

@picoplankton There are some community tools out there that can run the referee logic locally for this very purpose, but I haven’t used any of them personally.

you wouldn’t be able to point me at one, would you ? I guess I could write a wrapper myself. The graph is in the input layer.

I’m at no.1 of wood league 2 with a score of 25.7. I’m so close to beating that second boss, but I can’t figure out what the AI is doing… ever so slightly better than me

You’d probably get a better answer by just asking in the global chat to see what people are using. I’ve always just used something I wrote myself.

The second bot is using MCTS.