Title says it all.

I receive few incoming followings from nonames (meaningless nickname, 2-5 lvl, no avatar, etc), and even an immidiately CoC invite from one of them. Not responding in DM. Reported with no result. So I considering this is nothing more then spam and don’t want to see them in friendlist (call me perfectionist).

I’ve received your report and was going to send you a message.

On a clash lobby, you can see random online people and invite them (only if you follow them), thus the invites. I’ll check this clash invite feature again. I personally don’t like it and I’m questioning its purpose.

I might was not clear enough. I know there is no such feature, and this is a request topic.

Simple “remove follower” button can solve this, because it’s either unlikely those ppls cares about their mass-clicked-followings or even return to CG once more.

It is not only a perfectionist’s problem: if someone registers one time with an offensive picture I am forced to see that picture whenever I visit this page?

On a clash lobby, you can see random online people and invite them (only if you follow them), thus the invites. I’ll check this clash invite feature again. I personally don’t like it and I’m questioning its purpose.

Has the feature confirmed its viability over the time passed?
Some people just mindlessly abuse it, thus an invite spam in notifications. Not all CG coders are happy with being harrassed that way.

I guess it’d be better to have such a prerequisite as “(only if they follow you)” in order to stop the invite spam by unfollowing a spammer or to have some sort of a slider in profile settings to switch off annoying invites completely.

Another way is to filter out the list of online people, i.e. to show only those who’ve paricipated in clashes recently.

I’m a bit busy with the Spring Challenge 2020 preparations right now, but I’ll check this after. Thanks for reminding me. 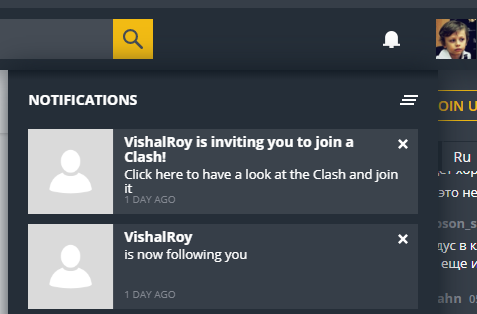 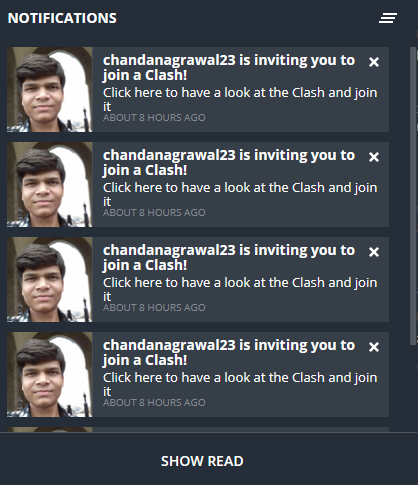 We’ve decided to add a setting to be able to prevent this kind of invites. I don’t know when this will be integrated but it’s in the backlog now.

Please give us some way of ignoring all invites, or ignoring a particular person.
Alternatively, only allow invites if the invited player is also following the inviter.

Random people have followed me recently, and now I’m being spammed with “x is inviting you to join a Clash!” every few minutes.
This is no longer fun.
I’m starting to think the only way to stop this is to delete my account and recreate it.

Ability to reject all clash invites! Maybe even automatically send the inviter a message:
“Non.”

It’s possible to mute invite notifications (and others) client side. CG enhancer does it among other things.
Here’s a snippet to do it:

There is a simple change that I think would solve this issue: player A can invite B to a clash only if B follows A.

But a lot of new players seem to enjoy that mode and they might not immediately add eachother. They might also start spamming in chat: “Add me for clash of code invites!”

Better to wait for the new feature mentioned in Thibaud’s post.

It’s easier to handle spam in chat than spam through clash invitation.

Can’t block people in chat for genuinely looking for someone to play clash with. Even if you redirect them to clash of code chat room, there will always be new people to ask the same thing in chat. It’s not a good solution at all.

I agree that allowing people to block all invitations in the settings is a (far) better solution. But I am not convinced that this will happen any time soon.

(it doesn’t prevent players from following you)

You actually implemented both options, nice!